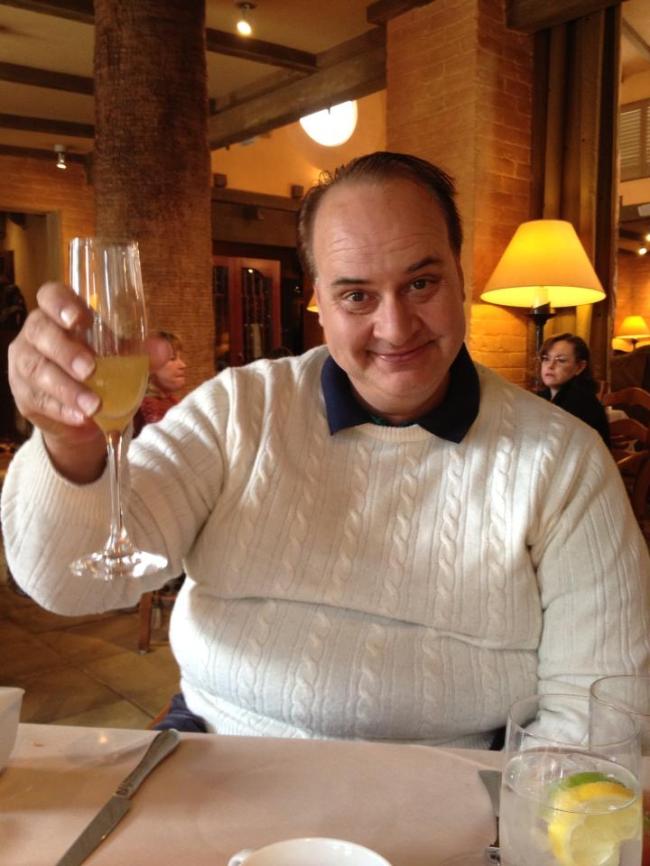 I couldn’t go one more post in this blog without introducing you to my dear sweet brother John.  He of course is the third “innocent” in our family.

When I was trying to think of a name for the blog, I kept going back to the picture I have posted of Cindy and I as toddlers.  She took this photo on I believe my 25th birthday and had it blown up to 8 X 10 and gave it to me framed, signed on the back. She used to laugh at this photo all the time and called it “The Innocents”.  Our vibe together was primarily laughing and energetic so this photo tells a very different sentiment.  I believe it was taken right around the time our mother was getting diagnosed with cancer.  I think you see that all over us in this photo although Cindy and I never discussed that. We just thought it was a funny photo.

I turned to a wordsmith friend of mine to help me figure out a name for the blog and shared about this photo with him and he replied “How about Two Innocents which also sounds like a cheer “To Innocence!”” I immediately got chills and a  lump in my throat and that was that.

Of course though, we can’t move forward without including our dear brother who was an infant at the time of this photo.  He was just 3 when we lost our mother.

John was always unique.  He was slow to walk and talk and used to speak we said in “Lebanese” as he had his own made up language before he actually used words.  He describes himself as with “learning disabilities” and had some time in remedial classes growing up.  We loved him all the same but to tell the absolute truth, I was so deeply and inpenetrably bonded with my sister that I spent much of my childhood thinking he was someone we had to accomodate.  It’s hard to admit that now but it’s the truth.  Cindy was much more patient and loving toward John than I ever was.  She was a surrogate mother to both of us  from ages 3 and 5 and I’m sure I just didn’t want to share her.

Even though John had some awkwardness socially and learning wise, he grew up to obtain a Bachelor’s degree in Marketing having followed Cindy to the University where she got her Master’s degree.  I lived in Arizona at the time finishing my Bachelor’s in Nursing.

John also followed Cindy to Minneapolis after college when she got a great job there heading up a Wellness program at a large corporation and he worked various jobs, always close to Cindy. They worked out together, dined together. She always provided a place of “home” for my brother.  I can say I never offered that to him through his life until just the last year.

John was always vulnerable though.  A sensitive and really fragile person.  But with the sweetest, purest heart and soul you could ever meet.  He has had to navigate a world of awkwardness and bullying and not quite fitting in his whole life.  But he has managed to maintain a fighting spirit, a distinct optimism, an appreciation for every small thing in his life, a long term memory I’ve never seen in anyone else and just a sweetness you rarely see in an adult.  I’ve often referred to him like “Forest Gump” in that innocence kind of way.  He was truly the most innocent of us all.

As utterly devastating Cindy’s murder was on all of our family, especially me, I think it hurt John the worst.  He was teetering on the edge of mental illness for some time unbeknownst to all of us.  I remember Cindy once telling me she’d gone to the manager at the gym where they worked out to complain that other men were making fun of him in the locker room.  Now of course I know that was his paranoia peeking through.  Cindy went to her grave never knowing John would “break” in to paranoid schizophrenia.  Her death took him right over that edge.  It was the worst casualty in our family I’m certain.

John got his nickname “Alfonse” one evening while we were visiting our Grandma on summer break.  Cindy and I, teenagers, had prepared some kind of Italian meal for all of us and she decided, in one of her “let’s make everything in to a game” moments, that we would turn my Grandma’s tiny condo in to a fine dining restaurant.  We tagged John our waiter for the evening, put a little towel over his arm and decided his name was “Alfonse” and that he would serve us all evening.  We all had a blast with it, as we always did, and the nickname Alfonse was born.  In case you’ve ever wondered, my nickname “katiecoolady’ was what my sister called me for years.  But she spelled it, for some reason “KT Coolady”.  When I went online, I resurrected that name as poignant as it was.  I wanted to be that again.

John didn’t come to the trials for Cindy’s murder except for one day.  It was just this past week that I learned that on that ONE day, he was exposed to one crime scene photo of my sister.  My father didn’t attend that day knowing that crime scene photos would be shown by the medical examiner.  I chose to work that day as we were warned this was not a good day to attend.  Inexplicably, our stepmother, decided to stay in there with John and moved themselves to the back row because she wanted to hear what happened in court that day.  She generally was more detached in things like this so could handle them.  I was both livid and devastated to hear that John had seen a glimpse of that photo from the back row.  It’s an image you can’t bleach from your brain.  I once ran in to a similar photo online in some German publication as someone had told me I was on the cover of it claiming “Sister wants them to live!”.  In looking at that online I saw a very very fast glimpse of that photo and I started screaming uncontrollably.  It just breaks my heart knowing my Alfonse EVER saw a photo like that.

Especially knowing what came later.  His poor mind just broke.  He fell in to deep psychosis off and on for years.  Full blown paranoid schizophrenia rose it’s ugly head in to a mind that was already filled with cracks, held together with fragile mortar by the love and support he got from our oldest sister.  When she was taken, it all just dissolved. He spent years and years in and out of psychiatric hospitals and programs and it has just been heartbreaking, frustrating, devastating on our family.

There is a silver lining to this story and an update as Alfonse is living two minutes away from me now and doing very very well and is the biggest light of MY life these days.  I will write and fill in the blanks of how we got from Point Nowhere to this amazing miracle life we are living in right now.  But, for now, this is getting long and I’m crying too hard and it’s just not the moment for it.  There is fallout from a murder.  As positive as I am and as much as I do my best to find meaning and purpose in life, the murder of my sister broke my dear brother in half, plain and simple. And I’m not gonna white wash it.  And that went on for years and years.

But love and faith and miracles have brought him back. And brought us back together.

I’ve thought recently that  when I’m on my death bed and reflecting on the most important things I ever did in this life, throwing my brother a life raft this last year and pulling him on to my boat will be so far up there, nothing else will ever compare.