My little doggie dream continues to unfold in the most unexpected magical ways.

I’ve written about my treasure map before.   When I started feeling this irresistible magnetic pull toward getting a puppy, I realized this has got to be somewhere on my treasure map.  I went a’lookin and there, right at the center was this fox.  Carrying a large egg.  With a rhinestone on it just in case it hadn’t captured my attention enough. 😉

I remember the day I spent hours creating this treasure map up in Prescott and how I waited and waited for my central image.  And the moment I saw this large fox photo and realized that was it. I love making these maps in the almost entirely intuitive way–selecting and placing images based on how they make me feel without fully understanding their meaning.  For me, it’s a way to tap in to this deeper longing that is far beyond the conscious mind that chooses all day long.  It’s like a conduit to the dreams within the dreams waiting to be born.

I remembered the day I saw that fox on this patio down at the Ranch on my birthday trip last year and how I had that instant heartburst watching him scamper across.  I’d been obsessed with foxes before that but that incident sealed the deal.   I spent much of that week with my eyes peeled hoping for another sighting.  It was like someone waved a magic wand over me.

I have several fox images on my treasure map but the central one is clearly the strongest.  It’s the largest image and smack dab in the center.

Contemplating this I realize this fox is a CANINE but also sort of feline.  I’ve said “a fox is like a cross between a dog and a cat”.  I went a googlin this morning and was surprised and not surprised to find this:

Foxes are part of a large family called Canidae, which includes wolves, coyotes, and domestic dogs. They all have long snouts, but unlike most other canines, you’ll find a little cat in every fox.

My friend Max said “that fox represents the transition from cat to dog for you”.  Wow.  Nailed it.

Then there’s the egg. I remember feeling like this was kind of a fierce, almost unsettling image in a way when I put it there but at the same time I knew it was the only one to take center stage.

I was so focused on that egg that I even put that little rhinestone bling over the laminate, highlighting it.  Again, I had no idea why I did that other than it was just what was needed or felt right.  This is what makes the treasure map making process mysterious and magical.  At the point I chose this image I had absolutely no thought of getting a dog anytime in the near future. 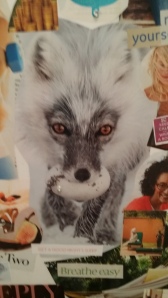 Well, as I meditated more on this, I realized my little puppy is an egg right now.  He’s likely not even conceived!  I made this treasure map for this year and in this  year my new little addition is just at the stage of an egg.  This cat/dog fox is presenting me with a blinged out egg!  haha  It definitely wanted my attention and got it!

Last Saturday four of us went to see the Phoenix Metropolitan Men’s Chorus in their summer concert which was fantastic!  It was so great to go see them again and realize Alfonse will be on that stage with them performing in just a few months!  In fact, he starts rehearsals tonite..wow.  It was a great evening out and we were all so psyched for him getting involved with this wonderful, warm, welcoming community.  We mingled after the show and he got introduced to several more members.  They even have a 92 year old man who sang from a seat in the front row of the chorus.  How cool was that? 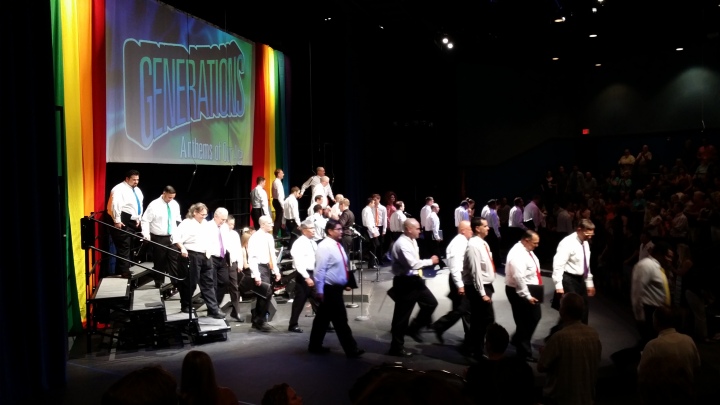 Before we left, Steve came over and we were talking about my puppy plans.  He has had dogs much of his life so he totally got my dream.  I found myself admitting something to him that I was also admitting to myself for the first time out loud.  That although I’ve lived alone much if not most of my adult life, I go to bed many many nights–both here and in Sedona (more there I think)–with a feeling a trepidation or insecurity.  Not a feeling of total relaxation, feeling slightly unsafe that someone could break in while I’m sleeping.  I’m not as hypervigilant as I once was (another story of waking up at 2am with a man crouched next to my bed in a townhouse I rented shortly after my divorce–I will write that one sometime).  But there is often this lingering fear that disallows me from feeling fully relaxed when I go to bed.  It’s been hard to admit that even to myself.

I was sharing about how I think having a dog will really alleviate that for me and will help me on that very important level of health.  Sleep is a big deal!

The next day I went again to look at my Treasure Map to just browse and look what I found, unnoticed before.  Overlaying my fox image at the bottom are these words:

Get a good night’s sleep

This thing keeps unfolding in the most surprising and charming ways.  I just love it.  Again I feel like I’m listening deeply and following the bread crumbs.  Which is really the way I want to live every single day, untethered by the mundane and tripping down a light filled path.

With my little doggie.  Soon. 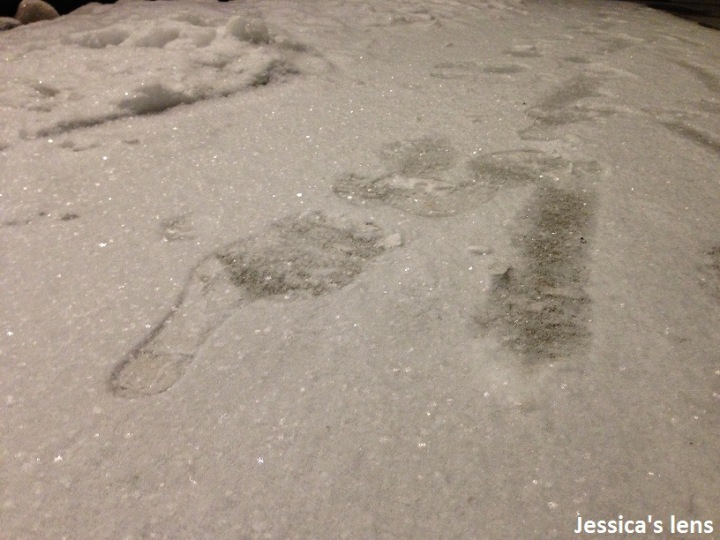