Alfonse and I participated in something very rewarding last night…and in our own backyard!

I want to share about it here so hopefully some of you can find this organization in your areas and participate if it stirs something in you.

I was invited to join a “Packs of Love” event by one of my clients awhile back but was out of town that time.  I decided to stay in town this weekend so was able to be involved and bring my brother!

The organization is called Feed My Starving Children.

The main project of this group it seems is to send these packages of food to hungry impoverished areas around the world.

On arriving, we sat in the main lobby and were given a brief orientation and video about how this process goes down.

Basically there are stations set up where a team of volunteers literally pack the food and seal it in bags then box it up.  By the end of the night we had boxed 48 boxes of I think 36 bags.

We deposited very measured amounts of a vitamin/broth powder, dried vegetables, a soy protein (dry) and rice through a funnel in to the plastic bags.  We weighed and adjusted the amounts then they were sealed and boxed.  Alfonse and I rotated in our team doing the bagging and depositing on the various food items.  We had a great little group and were singing and dancing…they played some great music to kind of keep you moving along. Each time we completed a full box we would yell out a little holla…we decided to yell Stayin Alive! as it was on the stereo at that moment.  And we all know I love disco. 😉  We had a darling little 8 year girl in our group (not this girl as I pulled this pic from the web). 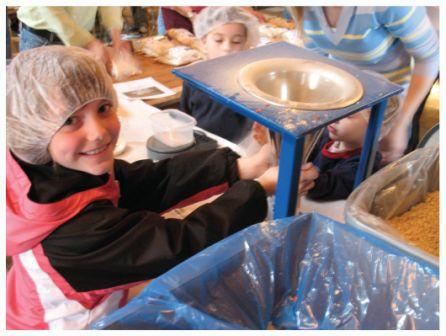 After the boxing period is over we were shown another video about how these food donations truly impact the people receiving them with a photo display.  They say that 90% of their donations go to the food itself and the packing is all done by volunteers.  Afterward they offered an opportunity to participate in a prayer over the boxes, which we did placing our hands on them (they make it clear this is just for those who are so inclined, which we were).

They also have a small “marketplace” in the lobby where they sell items made by the people in the areas they provide (ie purses from Haiti) as they also promote self reliance. The proceeds also go to support this effort. I purchased a bag of coffee, which I drank this morning, and made a donation.

It was a very rewarding thing to be involved in. Alfonse really enjoyed participating and said he wants to go once a week.  Even my Dad could participate as there is a job for those who need to sit, putting labels on something.  I’ll get him involved as well when he returns in the Fall.  A fantastic thing to do as a family.  I saw many families there together. 🙂 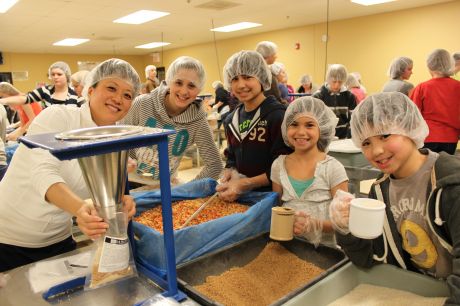 It feels good to participate in something like this.  And a very rewarding productive thing to do together on a Friday evening. Isn’t it funny that I recently wrote about saving the world over saving yourself and here we are, continuing to grow and expand. 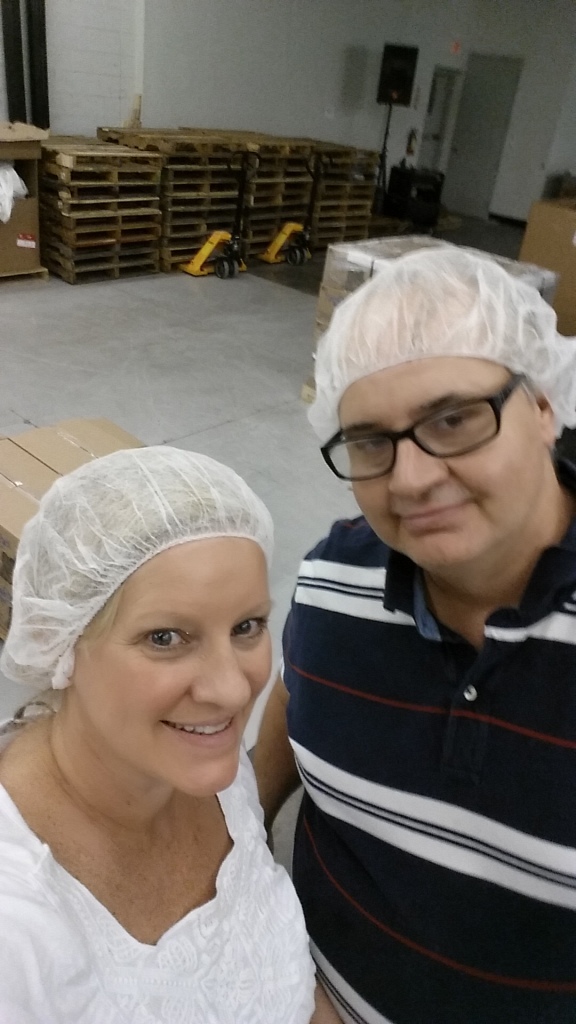 It all feels good.  John was much better last night and is reconsidering the Maine trip which I think is a good thing.

We just keep rolling along, trying to be the best people we can be.  This is truly a place where we can let our light shine. 🙂

Please check out this organization if you get a minute and are so inclined.  I think it’s a good one.

6 thoughts on “giving back”