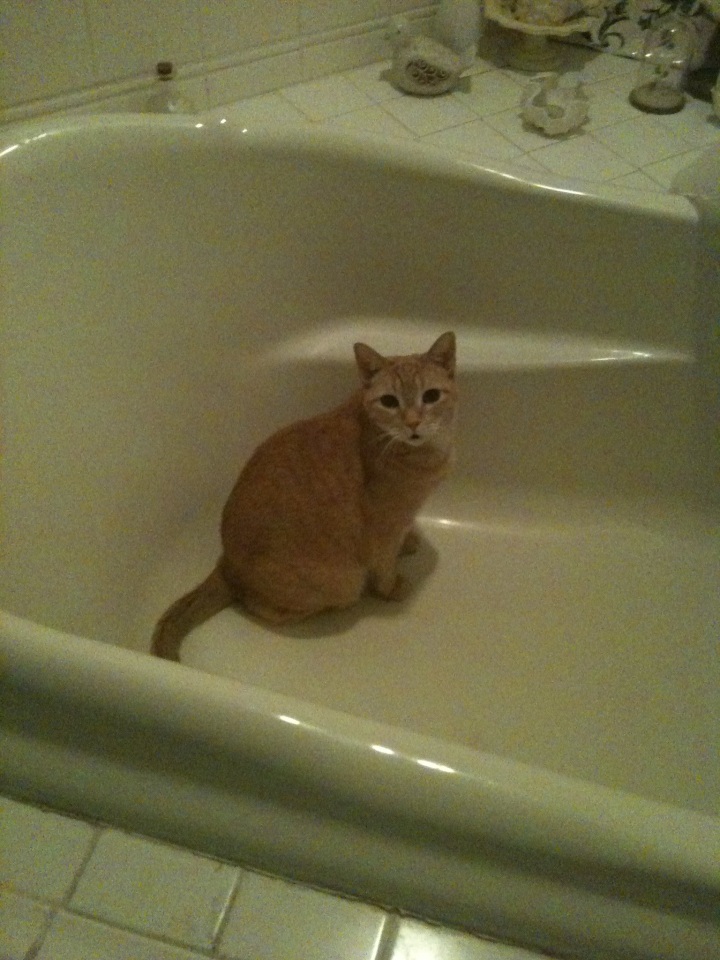 I spent as much time with him as I could yesterday up on my bed, his favorite spot just second to the back of the armchair I’m sitting in right now, curled around my neck and purring.

Buddy was never far from my side, ever once he bonded with me.  Most of his life he was right at the door as I opened it, having recognized the sound of my car coming in the carport.  He rarely was meowing asking for anything, he was just hanging out with me. 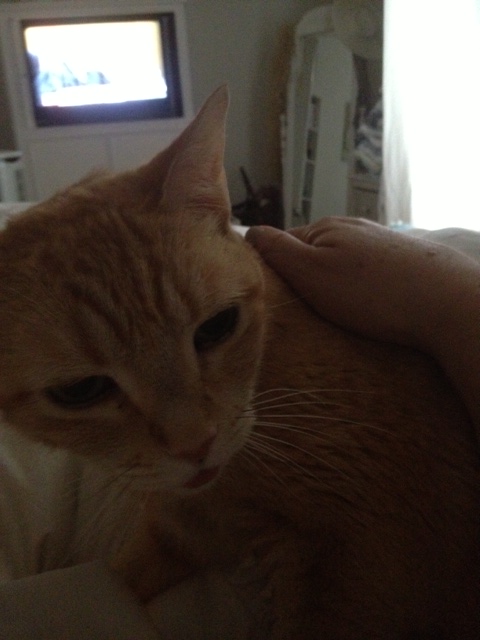 I know you’re not supposed to have favorites with people, pets, children, but to me that’s just unrealistic.  We typically have favorites.  And Buddy was mine.

That is, he became my favorite about 6 years after I lost my other favorite, Benny (well, Benson actually named after George).  Benny had traveled with me from apartment to apartment to house to marriage.  We had a long and varied history together.  He was also a stray who came to me.

I had a neighbor and her little daughter back with I was in college living in this sketchy apartment in not a great section of Tempe.  The Mom grabbed me to come over and see this kitten (now I’m not sure if there was a litter or just Benny) at her house that somehow her little daughter had brought home.  It was so odd but the Mom was completely freaked out by this tiny little kitten.  Like some kind of phobic reaction. She could barely look at him.  Another instance where I wasn’t supposed to have a cat but I took Benny in and that was that.

Benny also transitioned at home in my arms.  He had brain cancer at the time of his death.  I remember the moment I knew it was time when he lifted his heavy head and crawled over to me, placing his little paw on mine as I lay on the floor next to him sobbing and begging him for a sign.  I knew then and there he was only staying alive to comfort me and I begged, literally begged my mobile vet to come out that day.  I know he heard the desperation in my voice and drove 30 miles to my house. That’s love.

It’s funny, this week as I was talking to John about what was going on with Buddy, he emerged from his own acute issues for a few moments and consoled me.  He reminded me how I’d been through this before with Benny and “got through it” and “you will get through this too with Buddy”.  It really surprised me he even remembered about Benny after twenty years as he wasn’t even living here then.  I thought how sometimes another’s suffering is just what we need to be reminded of to pull us out of our own.

After they took Buddy last night (this service takes the pets to the crematorium for you) in that little open basket with a blanket over him, not his face, just his little body, I went to see John.  He needed cigarettes badly and some sweats and to hand off his laundry.

I slipped under the wire just twenty minutes or so before visiting hours were over but it was good to go.  Again, sometimes another’s suffering removes you from your own even if for a bit.  Or you feel less alone.  John once again showed the most signs of normalcy while talking about Buddy, how much he loved him, being sad he was gone. 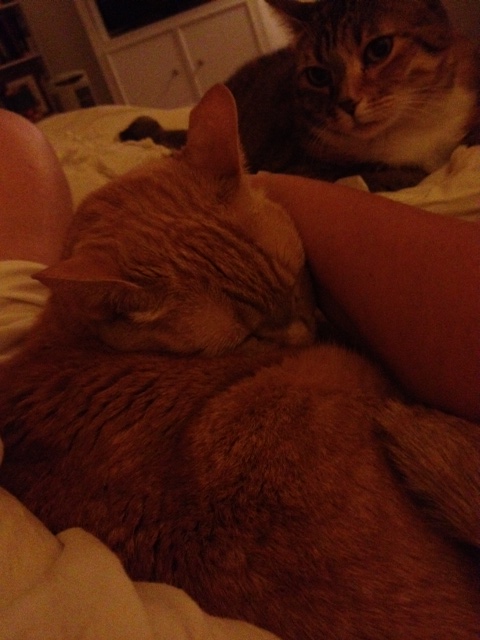 I brought him down from upstairs where he spent the day either under the bed or the table next to my bed or in bed with me. 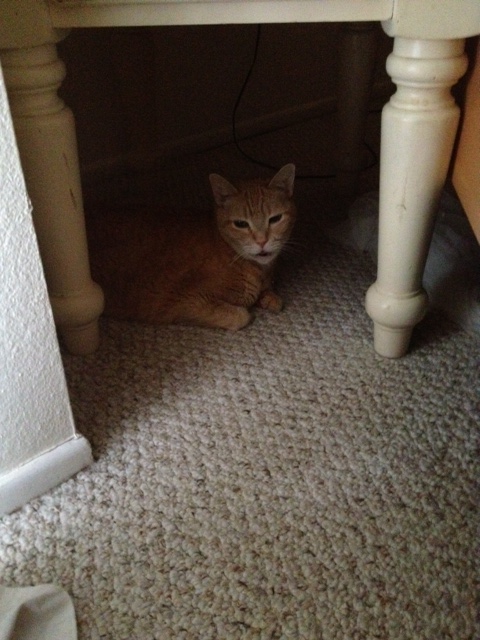 it’s unmistakable how sick he was that last day

As he lay next to me though, he kept moving and moving his position, clearly uncomfortable.  He kept trying to adjust his neck as the tumors were obviously making it uncomfortable.  He stretched his head back opening his throat to me to scratch and rub it.  That must have felt good to have some comfort brought to that area.  Those tumors were literally growing by the hour.  I’ve never seen anything like it. 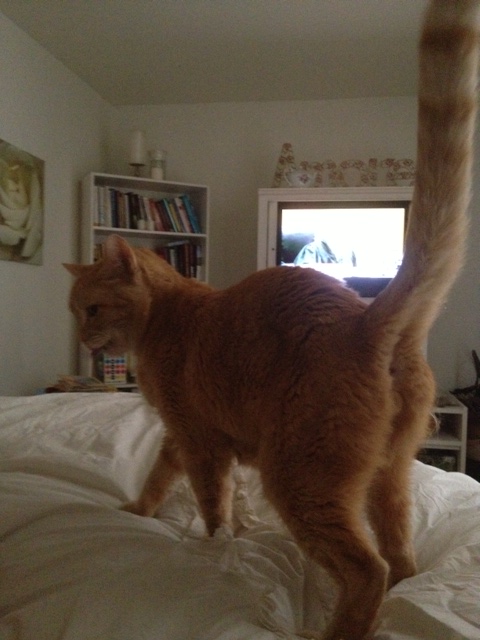 he just went downhill so fast, in a matter of 5 days

The Vet and her assistant were right on time.  The waiting part is just the hardest.  Watching the clock, counting down literally the last moments you will have with someone you love.  I honestly don’t know what’s worse, watching that countdown or being blindsided.  As you know, I’ve had both.

The Dr. was immediately consoling me as I opened the door and burst in to tears.  I imagine they are used to that.

She let the timing all be dictated by me.  She offered me a small blanket to hold Buddy in.  I placed him on the leather ottoman in the living room.

She gave him a shot in his leg to relax him before the final medication.  He didn’t like that shot one bit and squirmed and scratched and squealed.  That was not pleasant at all. But I’m glad I have those little scratch marks on my arm today.  I hope they leave scars.  I reminded myself, it would have been like that the entire way to the Vet had I tried to bring him in for this.  It would have been so much worse.

Within seconds really, he was subdued.  I just kept whispering to him in his little ear everything I used to say to him as I would lay and pet him “you’re my good boy Buddy…my precious boy…my Buddy…you’re my Buddy” in that little falsetto voice he responds to.  I also told him to go look for Mia.  That Mia is there waiting for him.  “Find Mia” I just kept saying.  “Find Mia when you get there”.

The Vet asked when I was ready.  It was very kind for her to let me dictate the timing.

She shaved his back leg and I kept the fur.  Steve put it in a little baggie for me. 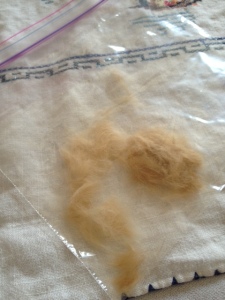 I held him talking to him as she put the IV in his leg.  I didn’t watch.  I just stayed in eye contact with Buddy.  He looked back at me.

Then, he was gone.  Just like that, my precious Buddy was gone.

Pardon me, I’ll come back in a minute.  I’m crying too hard to finish right now.

I had found a site online where they will make jewelry or something out of your pet’s paw print.  They had a recipe on there to make your own “Playdoh” mold then you can send it to them and they will create whatever you want.  I decided I wanted a keychain of Buddy’s paw.  So that afternoon I made the Playdoh (kind of cool actually). 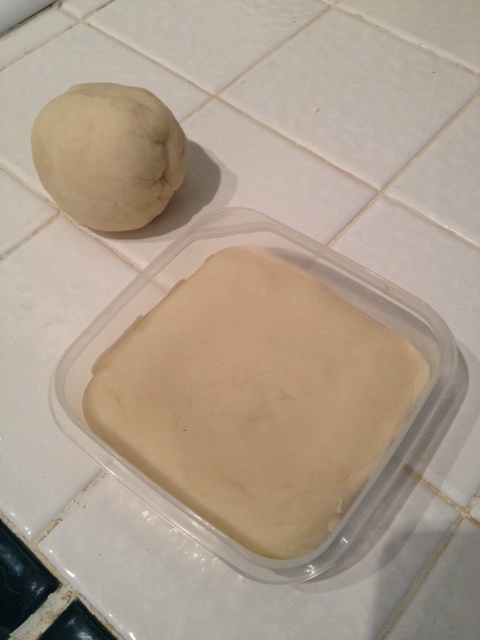 So the Vet not only did their clay paw print for me, personalized with Buddy’s name on it, but she also imprinted his little paw in the playdoh for me.  I’m going to get it made in bronze for my keychain. 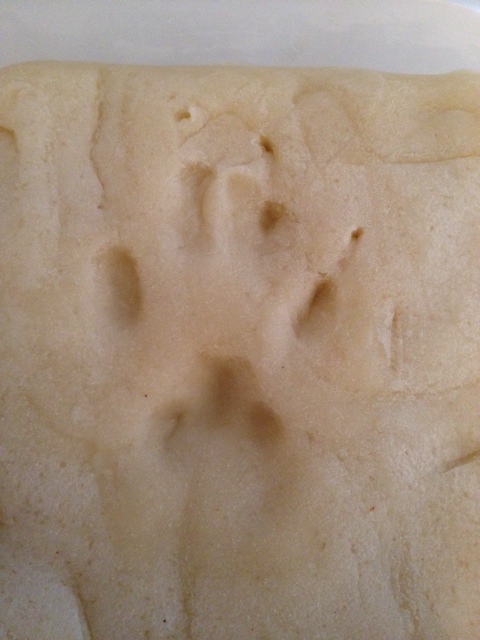 She was just so kind and soft during the whole thing.

She asked me when it was ok to take him and I just knew he was gone.

At some point I blurted out uncontrollably “I just want him back”.

Who doesn’t feel that way?

That cat was firmly ensconced in my heart, part of myself, for fifteen years I’m now thinking, doing the math.

She wrapped Buddy up in that basket, asked if I wanted to pet him or kiss him one last time and they left.

As I said, we grabbed things immediately to go see John so were in to that task mode instantly. 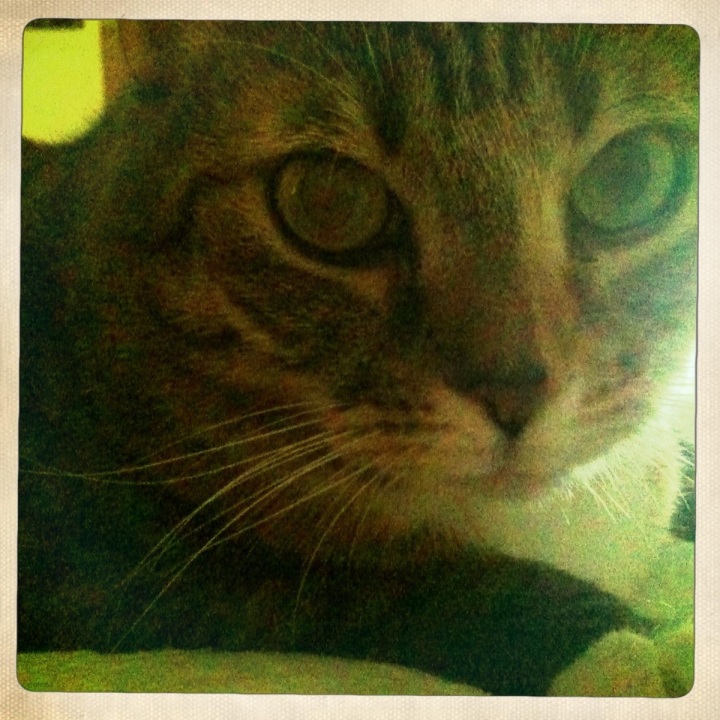 One thing that was very unexpected for me was that Sabine stayed in the vicinity the entire time.  She was just feet away in the dining room on the floor.  She didn’t run away when the strangers came in the door, didn’t run when Buddy squealed with the injection.  She just stayed right there, steady, solid for her friend. 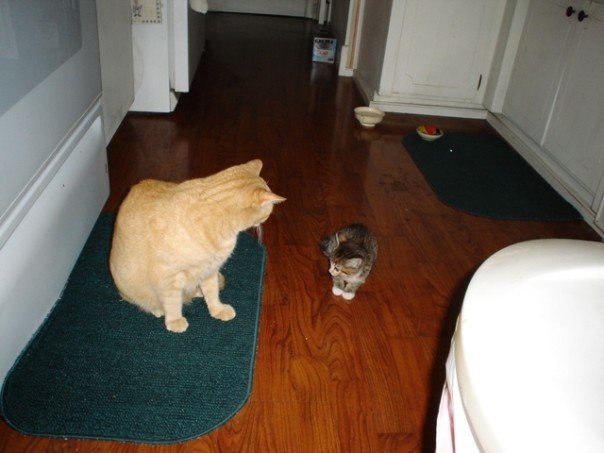 Buddy and Sabine when she first came in to our home

Steve and I went out for Mexican food on our way home.  When I got home I found Sabine sitting in the same spot Buddy sat over the last few days under the table next to my bed.  If that didn’t just break my heart.  I got Sabine in bed with me and petted her until I fell asleep. 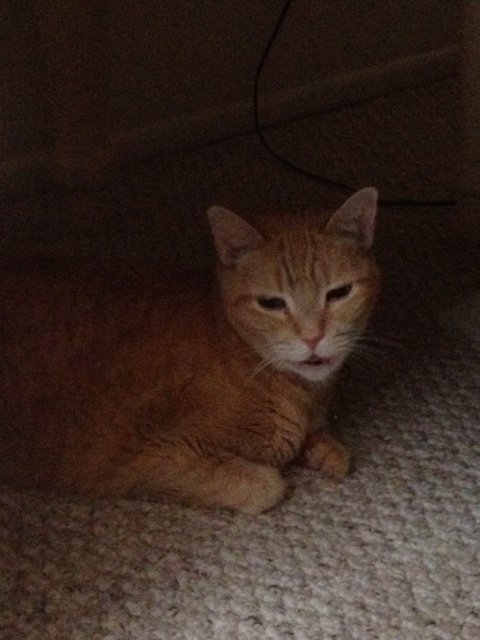 I woke up in the middle of the night with that horrible grief that you can’t escape, feeling physically just terrible.

I woke up this morning feeling worse once realizing Buddy was not next to me as always.  Was never going to be next to me again.

I began searching for photos of Buddy.  Of course I never took enough.  Of course I failed in having photos taken of me with him spooning or him behind me.  If they exist I can’t find them yet.

But the few I did find this morning I’m sharing with you now. 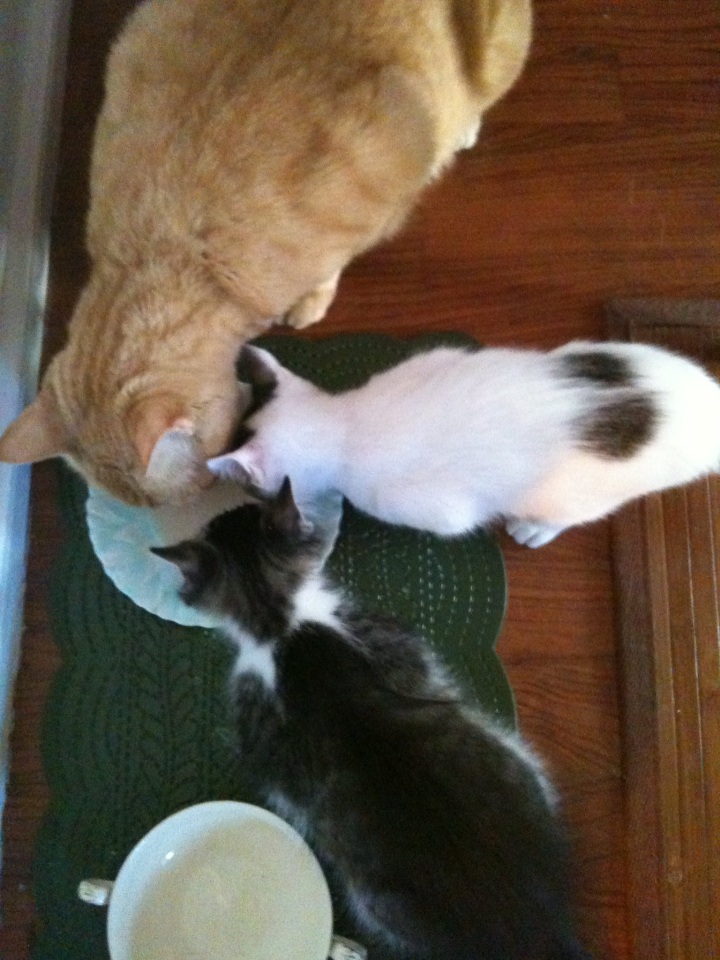 fostered two kittens found in a parking lot a year or so ago. Kept the white one, Coco who’s at my brother’s

I reflected on Buddy’s life this morning.  How he came in to this world.  How he was rescued.  How he stepped out of extreme fear and panic in to love and became my favorite.  My comfort, my support system, my little shaman.  My precious Buddy. 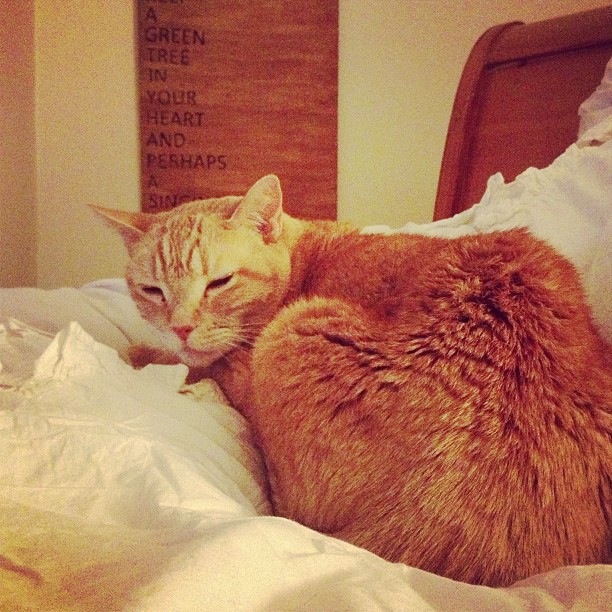 I figure the best way I can honor him is to be inspired to step out of my own terrible fears and find a path to love.

I believe you get more than one soulmate in this life.  I’ve had a few so far.  My sister, Benny, my ex boyfriend Rogelio in Mexico, one other man from my past and Buddy.  I guess I can count myself lucky.  I’m hoping I still get some more.

The tears will stop some day but for today I’m just terribly sad.  Sabine is watching me from across the room as I type.  She just moved to the bottom of the stairs and keeps looking up them like she’s looking for someone. Someone to scamper down the stairs and play with her or come sit with me or just be alive.

I told John I’d bring the cats from his house over here which will solve several issues.  But not today I don’t think.  I think Sabine and I will just be quiet and comfort each other today.

And begin to find a new sense of normal with one of our heartbeats beating from somewhere else. 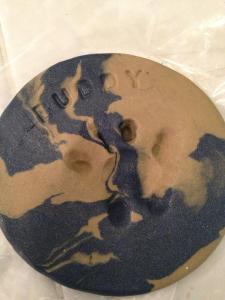 I hope Mia found you already my precious darling Baby.

This is the Vet service I used, an amazing service and worth every penny.