Oh Hi!  I didn’t see you sitting there for a second while lost in space obsessing about purchasing a hammock for our Sedona house.  Yes, I’m all about leisure and relaxation since I returned from my spa retreat.

Seeing I can’t build a window seat, I think the next best thing is a hammock on the patio, don’t you?

What do you think of this one? 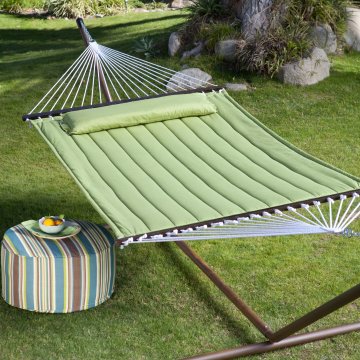 The location I’m intending to install this hammock will also have a direct view straight up to Thunder Mountain.  Ahhhh…reading and relaxing in a hammock outside.  Heaven.

I just love feathering this nest for my family.  I love thinking of my Dad and brother as I make selections, like the motorized window treatments for my Dad.  I’m thrilled at the thought of my Dad waking up in his cozy bed there and reaching over, pressing a button and the majesty of the best mountain view in the house revealing as that shade lowers before he even rises for the day. 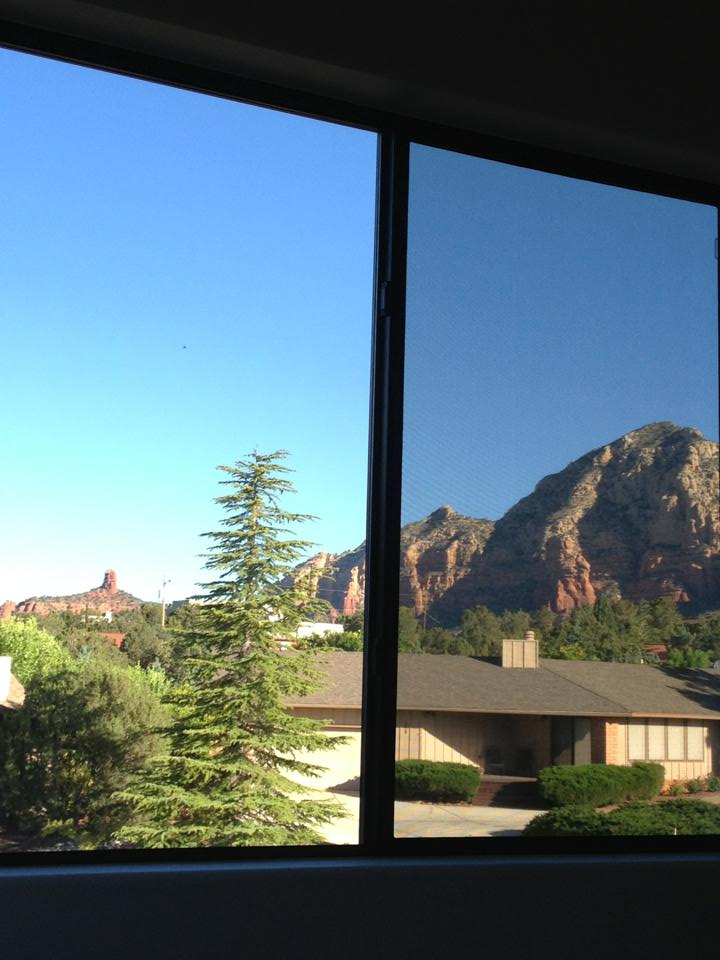 And this hammock being sturdy enough and wide enough to comfortably cradle Alfonse, being a bigger guy.   Also I think it would come as no surprise that I like to sprawl. 😉

It’s good to always keep imagining things at their best I think.  Plus I’m a natural born Cozy Environment Creator (just made that one up-ha!).   I think an element of cozy comfort is essential for, well, just about everything good.

Speaking of Alfonse, I picked him up and brought him home from the hospital yesterday, thank God.

When I got home from Rancho La Puerta, after my little encounter with prosecutor Juan Martinez WHO WAS ON MY SAME FLIGHT (oops did I just shout that?), I went right to see John in the hospital.

I saw Martinez boarding in San Diego and said a quick hello as I scurried past him (he got a middle seat, Southwest ya know).  Ran in to him again at baggage claim and we had a nice long talk there plus at the curb after walking out together.  He was very reluctant to tell me what he went there for “I don’t want to advertise it”.  But I, being me, weasled it out of him with a commitment to keep my mouth shut (sorry).  Let’s just say it’s out there should you want to google and he received a very high honor for his profession.  He was given a really cool trophy that he had checked in baggage as it was kind of big.  Good for him. He deserves it.

I don’t know if I was consumed with emotion just having left The Ranch and bawled my eyes out right before leaving, removing any trace of makeup that even had a chance to last on my face or the fact that I had this weird disheveled ponytail and a crumpled dress when I saw him so lost all hope at self consciousness, but I just overflowed with raw emotion talking to him.  I told Juan Martinez how proud of him I was and as a crime victim survivor how much I sincerely appreciated his efforts and sacrifice for all crime victims.  I told him I knew it wasn’t a well compensated job and one he’d devoted his entire life to and that wasn’t lost on me.  And then I reached over and gave him a big unsolicited hug.  And he hugged me back and did that little downward glance he does and smiled and thanked me nodding his head.  It was really a moment.

He had given me his number one day in court for me to contact him about something so after asking me how I was doing with our case, appeals, the horrible Judge we had (he knew her by name without me telling him), he asked me to call him to meet for lunch sometime.  Now don’t get any ideas on that.  Juan Martinez has never been flirtatious with me even a smidgeon.  He’s in a very long term committed relationship with someone and he wasn’t reaching out to me like that.  I just get the feeling that he sincerely cares about me as a human being.  Imagine that.

Ok well anyway, so back to Alfonse.  The night I visited him on my way home, he wasn’t doing great at all, yet was scheduled for discharge two days later.  I was a bit concerned as he was quite paranoid, yelled at a male staff member, told me over and over “I don’t care if everyone hates me, I’ll go to Heaven and people will like me there”. Things like that.  He wasn’t connecting well with me at all.  I spoke with his nurse who said he hadn’t been like that all day and this had just risen up.  It can be that labile.

Oddly though, even through his paranoia directed to some regard at me, he gave me the longest deepest hug when I saw him.  Like he was holding on for dear life.  I hugged him back with the same ferocity.  I guess it was an evening for hugging.

I just kept telling him I loved him, I’d made him a present and I’d see him the next day with cigarettes (he almost ran out while I was gone).

When I walked in yesterday to retrieve him, I was greeted with a bright smile.  He nearly ran over to me and wrapped his arms around me and if I’d eaten recently I might have had a Heimlech Maneuver projectile response.  He just kept exclaiming “I love you my dear Sister, thank you so much for coming to get me”.  There’s my Alfonse I know and love. 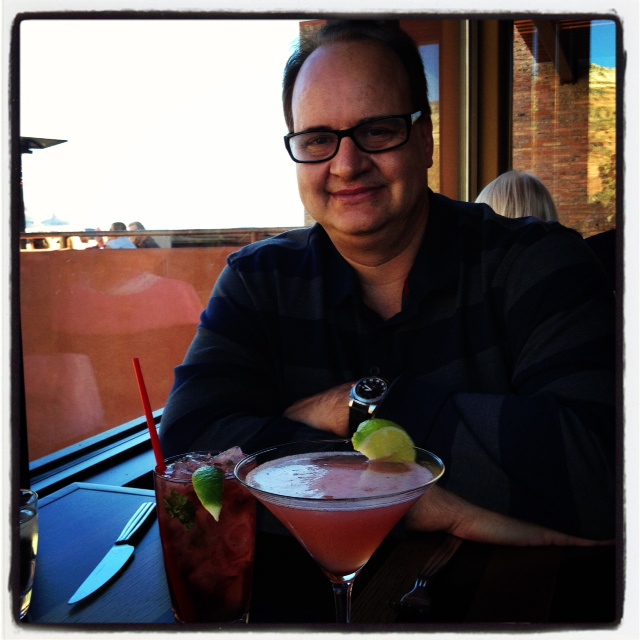 We finished up all the paperwork and met with Janet, the Social Worker my Dad had been talking to daily while I was gone that week.  As we sat down, with John, in the meeting room he exclaimed “don’t I have the most beautiful sister?  She was a cheerleader!  They only take the beautiful girls as cheerleaders”.  ha!  It’s like night and day as just days before he was telling all the staff how evil I was and how I was plotting to kill him so I could take all his belongings and inheritance for myself.  Sigh….paranoia doesn’t discriminate.  I just normally am not included in it.  Good thing it didn’t stick.

I took him out to lunch, then to the Indian reservation to get cigarettes.  The whole way home, he kept thanking me “thank you so much for driving me here, I don’t like driving in all that traffic while I’m on my medication”.  That was music to my ears because the less confident he is in driving the more easily I can keep track of him.  He shook my hand that day in front of Janet assuring me he would only drive to the store and QT.

We also talked about putting him back on the Niacin we tried when he first moved out here.  John was the most stable , for 9 months actually, when he was taking that Niacin.  I’d purchased a book by Abram Hoffer, a contemporary of Linus Pauling the Vitamin C guru that was all about this theory.  When John was living with me all last summer I put him on this protocol and he willingly tried it.  We kept titrating his dose up until he had his first “Niacin flush” (essentially a hot flash) and then knew his dose.

Why I ever let him go off that reveals my own denial.  People with mental illness will feel better then go off their meds and relapse.  I guess caregivers like me are not immune to this phenomenon.

Anyway, he’s back on it so I’ll be curious to see just how important it is for his recovery.

Here is an interesting article on the Schizophrenia / Niacin connection if you’d like to read more:

I also spoke with John about staying off Diet Coke as he now had two whole weeks without it and he agreed.  I explained to him that we need to make a focus on removing things that could be hurting his brain and doing things that could help it.  He was alert enough to discuss this with me and he agreed to try it.  “I’ll just drink water Kathy.  I’ll be ok with water”.

I’m telling you, he just breaks your heart with sweetness sometimes.

I had tweaked my back that morning sanding the callouses off my feet (don’t ask) so I just reclined in his Lazy Boy while he settled in.  I watched him nest around the condo, doing laundry, checking the frig, throwing things away, sitting down at intervals to pet his cat Lazlo and talk to him, lay on his bed, etc.  It was so heartening to see John just behaving in ways that were normal.  With Schizophrenia, a normal state of being is a state of bliss. 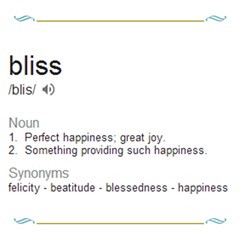 He wanted to spend the night by himself in the condo so I agreed.  Balancing that fine line of giving him independence while standing guard over his mental health is something I’ll be learning my whole life probably.  I want to consider him well and have him see that in me, expecting the best from him yet at the same time not let him fall through the cracks.  It’s a tricky maneuvering sometimes.

John called me this morning, anxious.  He said he’d not slept well last night, that the Prolixin was giving him “heart pain”.  “I might have had a heart attack”.  I’ve learned to not discount his fears and just assured him he could see the RN at Momentum and have her assess him.  He showed up in the ER just last month thinking he was having a heart attack and actually did get a total cardiac workup and is totally clear in that dept.  But there’s no reassuring that kind of fear.

I’m learning to just say “we will get it checked out at the Dr. tomorrow” (thankfully he has an appt) and let him be heard.

It’s more likely he’s experiencing anxiety but try to convince someone who’s anxious of that.  You just stay with what is their reality and do your best to reassure.

So we’re out of the weeds.

John willingly went right back to Momentum (his day treatment program) today and asked me if I’d come spend the night with him tonite, fearing he might have a “heart attack”.  So that’s what I will do.  Happily.

One thing is for sure, I will never give up on my brother.  To my dying day, I will hold vigil over his wellness and his capacity to heal.  If I can do that for him , just imagine how I might apply that for myself. 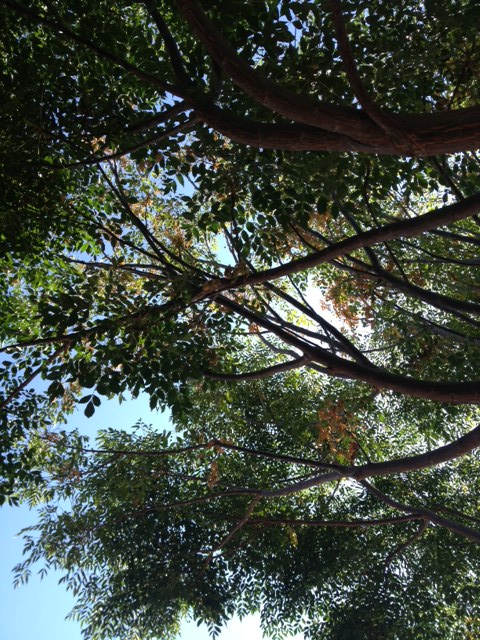 7 thoughts on “hammocks and hugs”