It’s been years since I’ve deliberately gone through family photos.  There were years after Cindy’s death when we never even took any family photos.

We were always a real “photo taking” family, lots of photo albums and scrapbooks. Rarely was there an outing or occasion where a camera was not present.  My father was always very good at memorializing all our fun times with picture taking whether we wanted it or not (teenagers).   This ceased for probably nearly a decade after Cindy was killed.  I imagine that’s not too uncommon for surviving families.  It’s one thing to have to feel that void in the architecture of your family but another altogether to have to see it, much less document it.  No one talked about how we’d stopped taking photos, it just happened.  I remember distinctly several years ago noticing we’d started taking pictures again.  It took a long time.

One thing that struck me while looking at so many old pictures of my own and John’s recently, was just how physically close Cindy and I always were.  Generally if we were in a photo together, we were side by side, often touching.  This is very descriptive of our relationship.  People often asked if we were twins although we really didn’t look alike and had completely different body types-she tall and lean, me average height and, well, not lean. 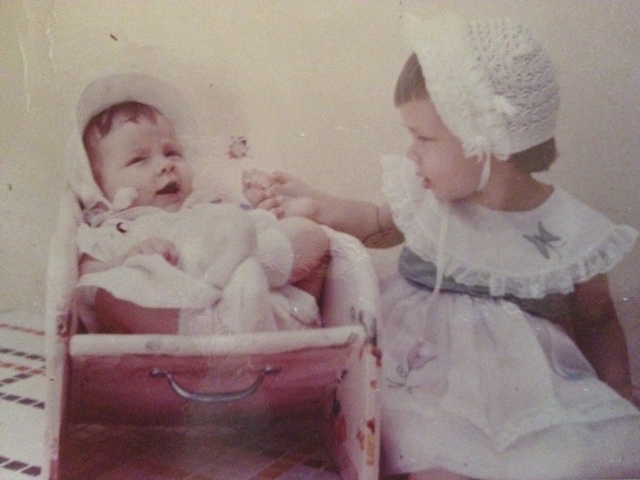 I remember my Grandma telling a story often of how Cindy reacted when I was brought home from the hospital.  She shared “Cindy would parade you around telling everyone ‘this is my baby!’“.  She would tell us often about how we were always close.  We rarely had any typical sibling rivalry, that Cindy was thrilled to have a new sister vs what first borns often go through.

I’m not saying we never had conflict.  There was a period in high school when she bullied me with her friends one night on a sleepover.   They wrapped themselves in toilet paper and paraded around my bed while I was sleeping chanting “Fatty Kathy Fatty Kathy Fatty Kathy”.   I remember being devastated but at the same time, not being mad because I knew she was just trying to impress her friends.  Besides that, I wasn’t fat.  She was just trying to push some kind of button.  We laughed about this many years later.

As I look at these childhood photos, I can see physically how strong that bond was formed.  Cindy always set the tone.  She was a very social person so once I came along it was like she had an instant friend, an instant dress up doll, an instant cheerleader, an instant fan who would basically go along with anything she created.  She was the leader and I gladly followed along.  Always. 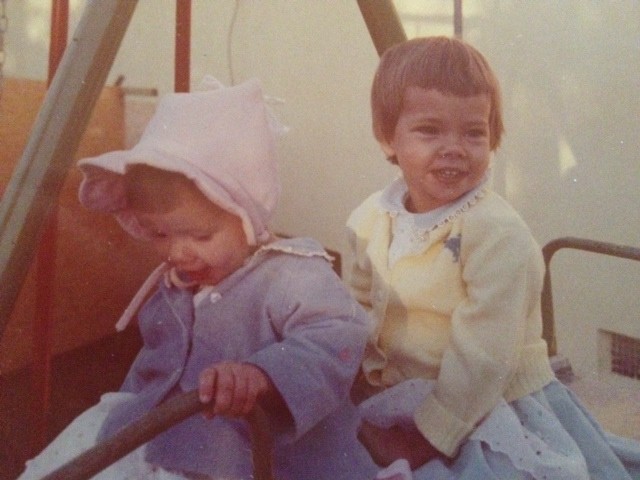 I know our mother had so much fun dressing us up identically like two little dolls.  There just was never much space between us.

I still have both these dresses from this photo.  Mine pink, Cindy’s blue.

Then I found this.

I look at this picture and I know instantly it was taken around the time we lost our “Mommie” as we called her and how she spelled it.  Or maybe around the time she was sick and in the hospital. I know we were showered with gifts at that time including these little ballerina outfits.   Our pain is washed all over our faces.  Even with a camera pointed at us, we couldn’t find our smiles.  My posture just looks so crushed.

We survived together.  We huddled together for safety and warmth and we drew an invisible line around our union that was rarely penetrable.  I feel sad for my brother when I think of his isolation in our family.  It was pure survival and I think we did very well, all things considered. 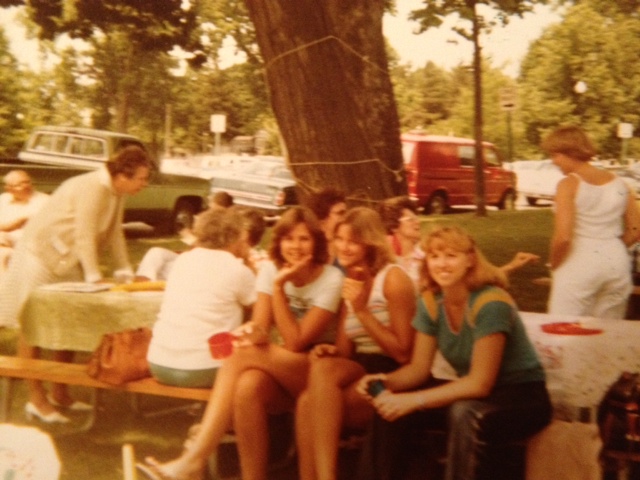 This is a blurry picture but it’s what inspired this post.  Cindy and I often sat together like this. So close it was almost like we were sitting on each other’s lap.  I remember feeling so safe in her sphere, always.

In our 20’s we did a lot of partying, of course.  We started noticing a pattern, that whenever we were together, we attracted men like flies unlike any other time we went out with friends.  There was something so unique and so magnetic about our dynamic that two of our good friends labeled it “The Monkman Sisters Syndrome”.   We could be covered in salt and wild hair with no makeup or in any way “dolled up” after a day at the beach and men would be falling over themselves to buy us a drink.  That almost never happened when we weren’t together.  I’ve not ever found that dynamic again.

When I think about it, I think it was that we didn’t really care if anyone approached us because we were having such a good time together.  We had our own language, our own nicknames, our own jokes and we were completely entertained.   We had a hard time finding boyfriends actually because no one really was as interesting to us as us.  We would find ourselves describing a new man to each other with phrases like “he’s just like YOU..” in one way or another.

This was a family Christmas picture in probably around 1980 or so.  Again you can see how I’m practically in her lap.

The Christmas before Cindy was killed, she insisted we take this “family photo” together.  It was all her idea.  She even wrote a little letter to go along with it.  We handed them out and gave them to our friends.  She showed up one morning with a friend to take the picture and we just walked in to my front yard and stuck our childhood Christmas stockings to the palm tree and snapped it.  I’m so glad and so sad that she did this.  As you can imagine Christmas has never been the same since 1988.  We’ve rarely taken another Christmas picture as a family again. 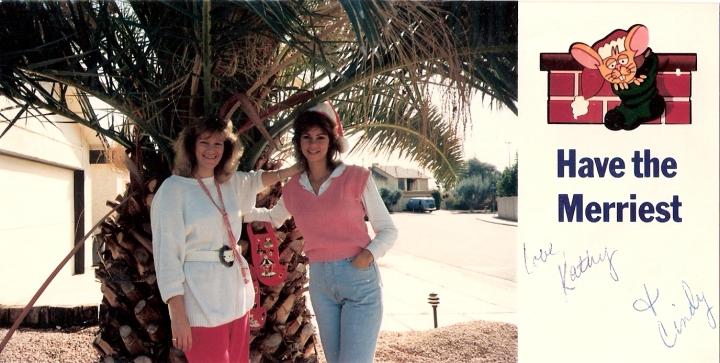 It’s a breakthrough of sorts for me that I can even look at these pictures, much less share them.  It’s taken over two decades but I’m finding ways to still feel that closeness even if it’s through a memory.  Or now as I’m seeking guidance and signs.

I know that I’m lucky to ever in my life have had this kind of connection.  Many people go through their whole lives never finding anything remotely like this with another human being.

It’s hard to feel lucky sometimes though when you also feel haunted with this memory.

Nothing  ever replaces growing old with your soulmate.  Nothing.