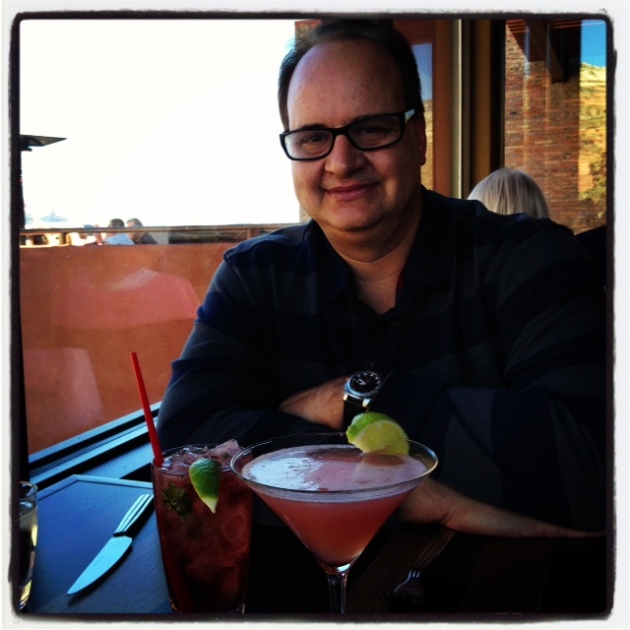 When John came out to Arizona for a mental health program in the summer of 2012, he told me he would only move to Arizona permanently if he didn’t have to live in Phoenix during the summer.  I can’t blame him, the summers here are brutal.  I didn’t know how I would make good of that promise as there was no way I wanted him to return to the life he’d had in Illinois where he’d become so unstable.  Even for a day much less a summer.

One month after he’d arrived, I took him to Sedona for the 4th of July.  I’ll never forget the look on his face as we turned that corner and he saw the red rock view and he kept exclaiming “Kathy, I love Sedona…I love the red rocks…I love Sedona” over and over.  It was like a magic spell was washing over him.  We stopped for lunch at the swankiest resort in town–Enchantment. We had a drink and a snack and on the inside I was marveling not just at the view but the fact that I was sitting here in this environment, with my brother, simply dining, chatting and taking in the view.  Without his being consumed with symptoms.  It was at this place that I realized we were really out of the weeds with his illness.

Fast forward a few months to January 2013.  We find ourselves back in the same restaurant eating lunch. I took this photo of him that day.  Our Dad had told us some months before that he wanted to purchase another vacation type property for our family.  After much thought, we landed on Sedona for many reasons but the look on John’s face that July day was certainly in my mind. Sedona would be a perfect location.  He could get away for the summer but not be too far.  I have spent years working and training in Sedona so it was just perfect.

By this day in January, I’d been looking online for properties for a couple of months.  We went up there for other reasons but John and I decided to have lunch, then go roaming neighborhoods to see what we could see.  Just a little recon expedition.

We drove in to a condo neighborhood that I’d seen online with just one property up for sale. We stopped by that location, John got out and grabbed the flyer in the For Sale sign then looked ahead and said “hey there’s another For Sale sign up there”.

We drove up to that property, he got out and grabbed the flyer again and to our surprise it was a brand new property, never lived in!  So we got out and peeked in all the windows and liked what we saw.  On a whim I just called the number of the realtor on the paper and she picked right up.  She asked me where we were, I answered “right in the driveway” and she said “give me five minutes, I’ll come right over”.

She showed John and I that home that day and by the end of our tour, my brother was showing me where we could put the Christmas tree.  Every window had an amazing view, upstairs and downstairs.  Three bedrooms, three bathroom, perfect for us.

We convinced our Dad to take a look the next day and let’s just go ahead and say, my father bought that house two days after the day John saw that sign.  It’s our new house!

John has not seen it since the day we toured it.  He spent a month in the hospital with a drug reaction this winter so missed the trip I took up there to accept a furniture delivery.  When I was up there by myself, I realized the builder had left one item behind that they had “staged” the property with.  It was left in Alfonse’s bedroom.

for the storm to pass…

It’s about learning to

Dance in the Rain

When I saw this proudly hanging on the wall facing his new bed, I felt like I was seeing that cane by the fireplace in the movie “Miracle on 34th Street”.

Tomorrow we head up together to accept a delivery of all of his furniture/furnishings from his apartment that’s been closed up in Illinois, finally.

For some reason, Alfonse had been accumulating new furniture, new dishes, new flatware, glassware, linens, etc over the last year.  Funny how everything has a “Sedona” vibe in earth tones and “Santa Fe” style.  It’s almost as if he predicted this home purchase.

And finally he will be reunited with all his personal belongings he’s been without for a year now.

And I’m sure I’ll take him back to the Enchantment Resort for a little celebration while we’re up there.

I’ll be back in four days or so.  With more stories. 🙂